In 1977, Óscar Arnulfo Romero y Galdámez was appointed Archbishop of San Salvador.  For three years, Archbishop Romero fought poverty, social injustice, assassinations and torture in the country of El Salvador.  Not long after his appointment to Archbishop, Romero was impacted by the assignation of a fellow priest and good friend, Rutilio Grande, a Jesuit who had been working to stop social injustice.  Seeing the body of his dear friend, Romero commented, “If they have killed him for doing what he did, then I too have to walk the same path.” Archbishop Oscar Romero fought valiantly to stop violence in his country and even personally urged the government funded soldiers to refuse, as Christians, to partake in any form of violence.  The day after making this plea, the Archbishop was brutally murdered during Mass. Saint John Paul the Great bestowed the title of Servant of God on him, thus beginning the cause for sainthood.  Pope Francis solidified this cause when he declared Archbishop Romero a martyr on February 3rd of this year.  Archbishop Oscar Romero teaches us with his life what it means for a grain of wheat to fall and die. 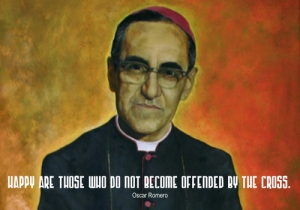 In today’s gospel reading (John 12: 20-33) we see how Jesus denied himself and followed the will of the Father.  Jesus admitted His anguish by saying, “Now is my soul troubled.”  Jesus continued by saying, “what shall I say? ‘Father, save me from this hour?’ No, for this purpose I have come to this hour.”  Jesus is denying his human flesh, his innate human desire to survive and is accepting HIS Father’s wishes for him to die on the cross.
Just look what His death did for us!  Redeemed us…saved us from spending eternity lost.  Now we have the opportunity to spend eternity in heaven!  This is the Good News!!!  We have a choice to follow Jesus’ example and live, or become saturated in the trappings of this world and risk eternal death.
None of us will probably be martyred for our faith like Archbishop Oscar Romero.  But, we are asked to suffer little deaths in this life.  Things like giving of our time when Father asks us to help with or even coordinate a church function.  Maybe we need to sacrifice our usual night out socializing to help take food or clothing items to a local family in need.  All the times we refuse our own wants in favor of helping another are examples of little deaths each of us are asked to endure.
Remember what scripture said: when “a grain of wheat” (all of our worldly desires) “falls to the ground and dies” (is denied) “it bears much fruit” (enfleshes the love of God in this world).

This site uses Akismet to reduce spam. Learn how your comment data is processed.